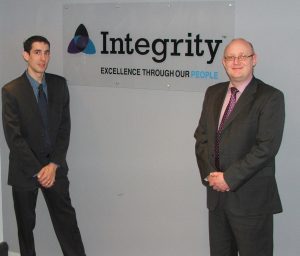 Integrity Service Group was formed in the depths of 2008’s recession by former colleagues, Tony Turner and Will Adams. With over 15 years of experience in the security industry, having managed 1100 staff and overseeing a turnover of £25 million, they decided the time was right to ‘go it alone’.

Initially starting from an office at home, within a couple of months they decided to secure office space in Solihull, attracted by the borough’s proximity to the motorway infrastructure and large commercial centres and also by the support given to businesses by Solihull Council. After two years in business, the company expanded into much larger premises and again decided to remain in Solihull.

Tony Turner outlined some of Integrity’s values: ” We have consciously decided to operate the business on a debt free basis which has provided us with a robust structure for the business. We have zero contract attrition as we offer a competitive price without sacrificing on quality. Initially, we reinvested much of the funds generated into gaining a number of accreditations, including ISO 9001; ISO 14001; Safe Contractor; Security Industry Authority Approved Contractor Status; British Security Industry Acssociation Principal Member and Investors in Excellence.”

Based in Solihull, Investors in Excellence Ltd (IiE) works with hundreds of private and public sector organisations across the UK and worldwide, helping them to continuously improve their all-round performance.

Ian Nield, Chief Executive of IiE, said: “Integrity Security’s commitment to achieve the Investors in Excellence Standard demonstrates a clear focus on continuous improvement and a desire to deliver the best possible service to their customers. Our work with Integrity to date shows them to be a successful, growing business, despite the tough economic climate.”

Sympathetic to the hard times that have seen many people lose their jobs, Integrity have enjoyed providing employment to many long term unemployed local workers.

Tony Turner, said: “We have recruited some excellent staff who have had bad luck in their careers, some of whom have progressed to be become managers within the Company.”

Steve Tommy, Commercial Surveyor for Hortons’ Estate Limited, commented: “We have used Integrity on numerous sites in our portfolio for some years and have always received a cost-effective, responsive and professional service.” Horton’s Estate Limited is an independent Midlands based property company formed in 1892. Their current property stock includes a number of landmark buildings, including office accommodation and lettings in Solihull.

Will Adams, Head of Operations at Integrity, added: “Our clients can be assured that in speaking to myself or Tony, they will always have access to the decision makers, and will not have to endure constant restructures and a subsequent lack of familiarity with their requirements which is often the case with national providers. We offer a level of proactivity and responsiveness that is second to none, and as we have carefully controlled costs and overheads, we are confident that we can offer to beat any like-for-like quotation.”

Integrity Security Group can provide security officers on a temporary or permanent basis, security patrols in highly visible vehicles, response to alarm, staff and vehicle searches and the installation of CCTV.

SEE WHAT OUR CLIENTS ARE SAYING

I can recommend ISG without hesitation. They will always provide a professional and cost effective solution to your security needs.